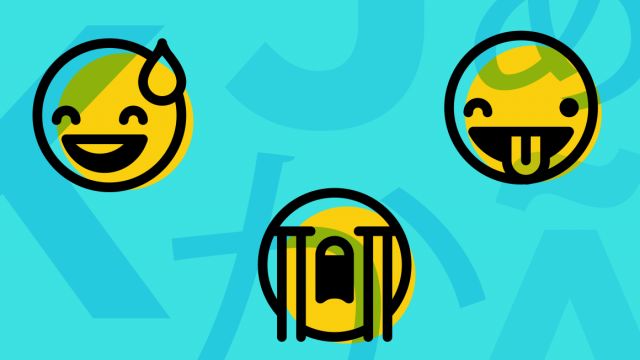 Emojis are everywhere. You may think they make your communication look juvenile, but actually, they’re not kid stuff at all. Emojis have a rich history, serve a practical role in modern written communication, and are becoming part of the fabric of modern global society.

When online communications were new, the Internet was a wild frontier, and nobody, literally nobody, knew how to use it. People got unreasonably upset over perceived slights, “flame wars" started at the slightest provocation (“flaming" was the term for hurling online insults at people), and budding friendships ended. Nothing was as common as misunderstandings between people that stemmed from being set free on a medium with no rules. Email and chat couldn’t convey intention, emotion, subtlety, or cleverness. Without context, humans did what we humans do best: we filled in the blanks. More often than not, it led to communication disaster. It became obvious that the Internet lacked key elements to human interaction: faces and voices. Of course, old-fashioned letter-writing had the same limitation; the difference was, people rarely used letters for the kinds of casual conversation that had become commonplace online.

Enter emojis. In 1982, long before the Internet was capable of supporting tiny graphics (or any graphics, for that matter), Scott Falhman made a humble suggestion to other users on a message board for computer scientists at Carnegie Mellon University. “I propose the following character sequence for joke markers: ‘:-)’" he wrote. Then, sagely, he added, “Read it sideways."

The simple character sequence was called an emoticon, and it changed everything. Emoticons were limited, but they did a big job: they provided emotional context to a statement (“Do you know how to use the Internet?" :-)) and could serve to diffuse a statement that might be taken the wrong way. (“I won’t be there tonight." :-( )

Emoticons were a good start, but more was needed. As humans, we need to interact with faces. In fact, studies have shown that over 60 percent of the way we perceive communication depends on nonverbal cues like body language and tone of voice. Without these elements, we attach meaning to other indicators in the communication. Capital letters are thought of as “shouting," and even punctuation, or the lack of it, has hidden meaning. Even today, properly-punctuated text messages can be interpreted as being creepily enthusiastic or passive-aggressive. So when mobile social media and text messaging came on the scene, and people all over the world began communicating more frequently, and more casually than ever, something had to be done.

A tiny history of emojis

The answer came in the late 1990s when Shigetaka Kurita, an employee at NTT Docomo in Japan, designed a set of simple images to appeal to the teenage customers of its pager service. Inspired by both images from popular manga and Japanese characters, Kurita designed 176 original images that became as powerful a tool to written communication as the first pictograms millennia ago. He called these images “emoji," a combination of the Japanese words for “picture" (e) and “character. (moji). In doing so, Kurita created a universal language, one that crossed verbal and written language barriers, added emotional context to words, and even gave us the faces that people naturally crave. The invention that started on teenagers’ pagers quickly spread onto global smartphones, into social media, and became a cultural phenomenon.

Official emojis are now governed by a non-profit organization called the Unicode Consortium, and there are currently 1,851 emojis recognized by them, with 69 more coming in June, including fantasy characters like genies, zombies, wizards, witches, and fairies. It’s not possible to create your own emojis, though many online apps have custom emoji-like stickers, and platforms like Slack support users creating tiny reaction images. As with any language, emojis were quickly politicized, and, as a result, Unicode sets standards intended for inclusion and diversity, such as variable skin tones and gender neutrality.

A picture really is worth 1000 words

Wizards and witches? Dinosaurs? Socks, soup, and flying saucers? How are these emojis practical for clarifying communication? What’s happening here? A study from Instagram suggests that emojis are evolving into a discrete language as people combine individual emojis to make unique messages.

The Instagram study also suggests that emojis are replacing alphabet-based Internet slang altogether, such as 😂 replacing “LOL" and 😱 taking the place of the ubiquitous “OMG." There is evidence to suggest that emojis are standing in for the actual words and are breaking down worldwide language barriers as most (but not all) emojis have similar global interpretation. As the old saying goes, a smile is a smile in any language.

So if emojis can clarify written language, instill global understanding, and even replace words themselves, what else might they be able to do? Here at Evernote, we suggest:

This is the one place you can choose any emoji to mean anything you want. Just be sure to specific emojis consistently, so that the meaning of each emoji is the same to everyone reading the note. To be even clearer, create a legend so that all participants use the same emojis.

Tip: Use an emoji as a digital tattoo in your profile name to promote your personal brand in your favorite chat app.

Are we forgetting how to read?

One might wonder if emojis might someday replace the written word altogether (and if you’re not uncomfortable yet, here’s Shakespeare’s Romeo and Juliet told entirely in emojis). We might forget how to use written language if emojis continues to evolve, some worry.

Forgetting how to read is not as concerning as what happened to the ancient Egyptians. Their highly advanced written language, which was also pictogram-based, was entirely forgotten for four thousand years. Anybody who visited archeological sites and tombs could see the writing on the wall, but nobody could read it. The Rosetta Stone was found in 1799, delivering the same message in three languages—Greek, demotic Coptic, and Egyptian. It took another 23 years, but it was the existing alphabet-based languages that eventually unlocked the the mystery of the strange hieroglyphics. It turned out that each glyph represented a sound, so deciphering the Egyptian message was a matter of cryptography.

Future linguists will have a harder time with emojis. They represent ideas, emotions, and cultural references which will have long since disappeared. What will they make of a symbol like an open hand? (🖐️ ) Does it represent the number five? A wave? “Talk to the hand?" “Stop"? What kind of Rosetta Stone will help interpret the meaning of 😬 ? Some people see it as an ironic grin, and others think it’s a painful grimace. People have conflicting interpretations of certain emojis, and the problem is compounded by the fact that the pictures themselves are not standardized across platforms. So the emoji you send to a friend from your iPhone might be received on a Samsung or Android device as something different altogether.

These examples alone indicate that written language is in no danger. Like Egyptian hieroglyphs, emojis are probably set in stone, but they will never completely replace the richness of the written word.