This Student Made Productivity a Habit

How One Student Made Productivity a Habit 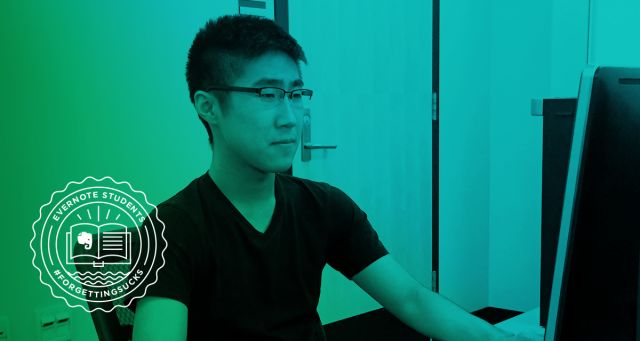 Comment
You just know more once you’re a sophomore in college. You know what to expect, and the mistakes you made as a Freshman are, hopefully, behind you. You know what’s up. That’s what Vinson Luo thought as he started his sophomore year as a computer science major. Another year of scribbling in notebooks, trying to copy diagrams properly and hoping beyond hope that he didn’t spill anything on his notes. Or worse, drop them in the snow. After all, Vinson is a native of Taiwan who grew up in California, and he just didn’t do snow.

One of the things that Vinson, a sophomore at Indiana’s Purdue University, learned during freshman year was that taking notes by hand wasn’t always effective. So this year, he tried something new: note-taking in Evernote. "Back in Introductory Object Oriented Programming and Programming in C and C++, the lectures contained a lot of code snippets," Vinson explains. "Those snippets aren’t the easiest or cleanest things to try to write down. Last year when I took the course, it was just messy, taking handwritten notes. They’re easy to lose, and they can get damaged easily. As a CS major, a lot of diagrams come into play, and we need a way to get crisp and clean images for notes and homework."

Since turning to Evernote Premium in August, Vinson has a much easier time keeping up. He created notebooks for each of his classes and keeps notes for each class within a notebook. That way, when he’s studying later, he needs only to search for keywords within the class notebook and avoids having to wade through unwanted or confusing results. That came in handy: freshman year was just a glimpse into how complex his more advanced classes were to become.

PRO TIP: Use Command+J to quickly switch between notes, or use Evernote’s advanced search syntax

Firing up both laptop and computer to capture everything

"Now in Computer Architecture, in addition to code, there is also hardware, like circuit diagrams," Vinson reports. "That class is pretty graphics heavy compared to the other CS courses that I have taken. That’s where the whiteboard/image capture comes in handy. There is absolutely no other way to keep track of all that, drawing them AND following along with the lecture. With Evernote, I can open up my laptop and have my phone’s camera ready. I can type and import images into notes relatively quickly."

Getting to the point where using Evernote was a natural part of Vinson’s day took a little time. When he was first introduced to Evernote this summer, his initial thought was that the product was interesting and could be useful to people in college, but only if students used it regularly.

"Before, I didn’t carry my laptop with me to class," Vinson says. "Just because it’s dumb and heavy and I was used to pen and paper. But on the first day of the semester, I brought in the laptop and just gave it a whirl. It surprised me how quick, efficient and organized I can keep my notes. Over time, I started to bring my laptop to all my lectures every day," he remembers. "I didn’t even really notice that Evernote was gradually becoming a habit."

How to Know What You Don’t Know

Outside of class, Vinson discovered Evernote helps him to not only find his notes but to discover gaps in his knowledge. "I’m okay with coding at this point, but when hardware logic comes into play, that’s a little more frightening," Vinson relates. "I didn’t know what I knew, and I didn’t know what information I was missing. I use keywords from study guides and plug them into Evernote if I can’t find them in my notes. If those keywords aren’t there, it means I’m missing something." When a keyword fails to appear in Vinson’s notes, he goes back to the textbook and class materials to fill in the blanks.

"I can’t really go on through my college days without Evernote now," Vinson says. "I’m even going to use it for digital illustration." For years, he’s been developing artwork for characters and stories, filling up sketch pads and notebooks with ideas. "Evernote will be helpful for gathering reference materials for both my artworks’ visual and background stories," he says.

Vinson proves that you can still improve your note-taking—and, by extension, your college experience, by finding a better way to do it. And, as Vinson discovered, when something works that well, it’s easy for it to become a habit without too much effort.

For a limited time, eligible college students can get a year of Evernote Premium for $17.50 (75% off).