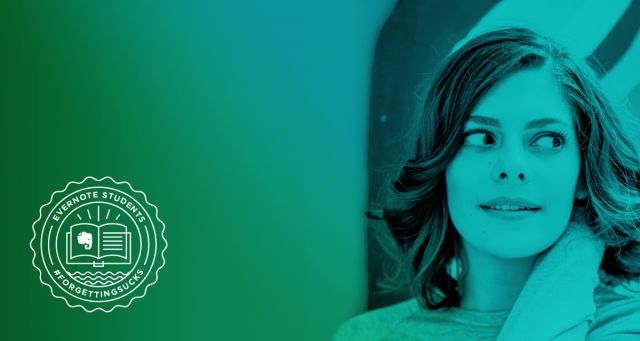 Even though she’s a Theatre Arts major, Molly O’Donnell keeps the drama on the stage. A no-nonsense freshman at University of California, Irvine (UCI) in southern California, Molly is driven, high energy, and self-managed. She’s 18 years old, and she’s taking— 21 units in her first semester. She’s living off-campus. And she’s definitely doing college her way.

Though Molly had never worked with Evernote before starting college, she jumped at the chance to become one of the students the Evernote blog follows throughout a semester. When we last checked in with Molly, she was the last of our four to leave home for college. At the time, she envisioned Evernote as a tool to help bring students together for collaboration, and she was already planning on recording audio lectures using Evernote’s recording feature while taking notes.

It seemed only natural that Molly would get involved with a college theatre production immediately, taking on a role involving a large amount of administrative work. As a production assistant, one of her first tasks was to create digital copies of the script for all of the actors, designers, and technicians.

Molly didn’t have time to find a scanner, manually scan each page, convert the original scans to PDFs, and then stitch together all the individual pages back into a book. Instead, she was able to do the entire task in just minutes with Evernote. Then, she could send the finished PDF book to everyone who needed it. "Evernote made it simple," she says.

One thing that Molly always knew was that college is expensive, and never was that more apparent than when she became responsible for managing the money she worked all through high school to save. "I take pictures of all my tuition checks and all my financial stuff so I can keep track of my spending, and it’s all right there with me, wherever I am," Molly added.

Evernote is always at her side

In class, Molly has embraced every feature of Evernote that she could find. "I use my phone to photograph white boards. I email things into Evernote. And more than anything else, I save all the PDFs that are given out in my classes. It is so easy to copy and paste the link into Evernote and then the PDF is immediately there!"

While many other college students argue the merits of notebooks or tags, Molly actively employs both. "I create specific notebooks for each class so that it’s easier to find what I’m looking for and I know that I have everything in one place. I love keeping everything organized," she says. "When I’m studying, I’ll just type in one of the tags I assigned to my files, and I’ll find what I need fast. It’s a lifesaver when I’m in a hurry." For Molly, a decidedly Type A personality, ‘hurrying’ is an everyday occurrence. "I have a notebook for my Humanities Core class that made it efficient to study for midterms," she relates. "I didn’t have to go back through my handwritten notes as much since I had it all on my laptop. And they were all highlighted and annotated already. A lot of my classmates asked about Evernote after that."

"It would have been so useful in high school"

Molly remembers her high school days with a touch of wistfulness. Not just for friends who scattered to different colleges around the country, or for those still back at home, but because she didn’t know about Evernote. She had been the president of her high school’s performing arts club, and an AP (Advanced Placement) student in almost all her classes, as well as a performer. "I would have asked all the other officers to get Evernote so that we could share documents and keep updated on finances and events," she said. "It would have made the performing arts club a lot more efficient and organized. I would have loved using it for my French class, especially. I would have made a notebook, and I could have put all my terms in there, and all my worksheets, and I wouldn’t have had to hold onto tons of pieces of paper. It would have been so useful."

A notebook full of cuteness

Even determined Molly isn’t all work and no play. She learned about another Evernote user who had created a collection of pictures of baby animals that he clipped from the Internet using Web Clipper. Inspired, Molly created her own notebook of cute baby animals. "It’s made me so happy," she said. "Whenever I get stressed or lonely, I can just go to this notebook and smile. One time, a friend was having a lot of issues in her chemistry class, and she doubted her abilities. I sent her the notebook, and it lifted her mood."

Modestly, Molly claims that she "likes to keep busy." So busy, in fact, that UCI agreed to raise its per-semester unit cap to accommodate everything she wanted to get done. After a semester using Evernote, she’s sticking with it. "It’s really helpful," she said. "I’m going to keep trying to find the little tricks it has to make life easier."