This week is Evernote’s 8th anniversary. It’s a time to celebrate and reflect on what’s most important to our customers and to us. We value how much people have come to love Evernote, and have made it a part of your daily lives.

We began to see this movement early in the company’s history. Users immediately saw the potential to remember everything—like Ron Toledo, who, in 2009, preserved his late grandmother’s handwritten recipes in her own handwriting, making those recipes searchable and shareable.

Today, people continue to use Evernote to reach personal goals. Recently, British businesswoman Nisha Harish used Evernote to write a book about how to successfully run the Marathon des Sables—the "toughest footrace on Earth"—while she was running it. She told us that Evernote allowed her to achieve a major life ambition. We know that this level of trust is something earned, and for your belief in Evernote, we are truly grateful. 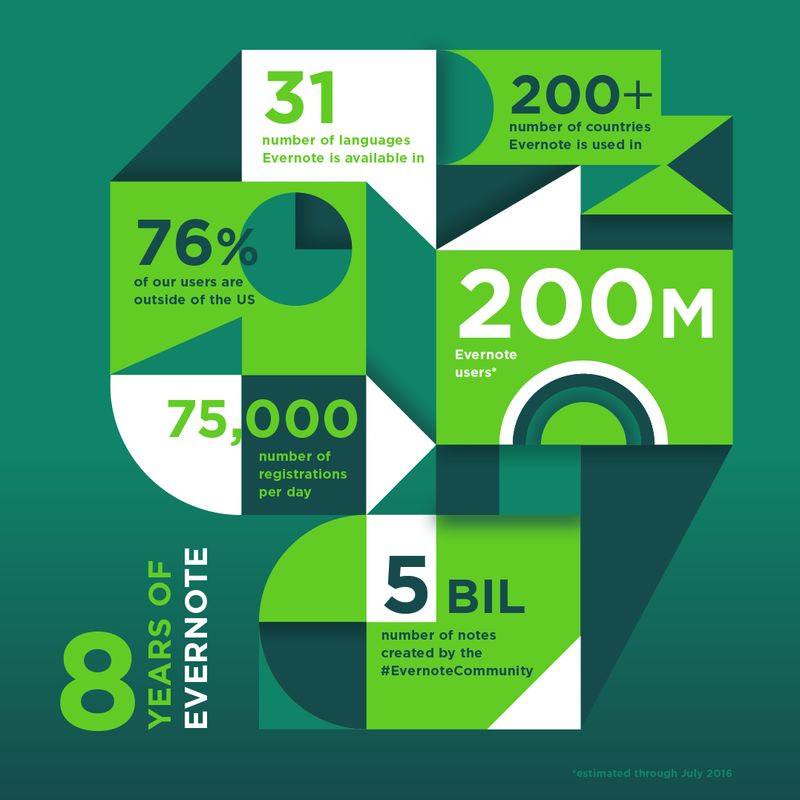 On this anniversary, Evernote is about to reach a staggering statistic: in July, we expect to welcome our 200 millionth customer. Our customers live in 200+ countries. They speak 31 languages and reflect every imaginable walk of life. The one thing they have in common is that they trust their ideas, documents, notes, and dreams to Evernote. Over eight years, you have written five billion notes. That’s almost the equivalent of one note for every literate man, woman, and child on the planet. We’ve recently passed 20 million users in Latin America, and about three-quarters of all Evernote users live outside of the United States. To give it an appropriate high-tech spin (we are in Silicon Valley, after all) Evernote is one of the largest keepers of unstructured data in the world.

A promise to you

To celebrate our anniversary, we want to make you a promise. Over the past eight years, you’ve shown us an incredible amount of love in the form of faith, trust, and dedication. We want to give it back to you by letting you know that the content you put into Evernote can stay there as long as you need it. We call that promise #forevernote. So you can be sure that the book idea you tapped into your mobile phone years ago is going to be there for you when you’re finally ready to write it. You’ll be able to look at your child’s kindergarten drawings, as fresh as when they were scribbled, on the day she graduates from college. And you can bring your "crazy" invention back to life when you realize that the world has caught up with your vision. You can change jobs, move, get new devices, even forget what you put into Evernote. Like the iconic elephant that represents us, Evernote never forgets.

Like the iconic elephant that represents us, Evernote never forgets.

We were there at the beginning of the mobile app revolution. The day Apple launched the App Store® in 2008, Evernote was part of it. And we’ve been right there with you ever since. Most people only use a handful of apps regularly, and research shows that we’re one of the apps on your home screen you’re likely to tap into daily. In fact, we see at least 75,000 new registrations every day. Numbers like that are sobering and humbling.

Before I became the CEO of Evernote, I was a customer. So I understood first-hand what a deep personal connection Evernote users have with the app. When so many people use one app to do so many different things, the potential for growth, particularly in the age of the knowledge worker, is astounding. Take Russell Curtis, for example. He’s a London-based architect who moved the very life-blood of architecture, paper, to Evernote so that everyone in the firm can share ideas, collaborate, and work much more efficiently, both on site and in the office. That’s just the very tip of Evernote’s potential in the knowledge economy.

To honor the future, we respect the past

On our 8th anniversary, we’re looking to the future. When you have an app that helps capture your deepest thoughts, your most important information, and helps you germinate and grow ideas—it becomes more than just an app. It’s an extension of who you are. It records your human experience.

Evernote has become a ‘sacred space’ to millions of people. Holding this level of trust for so many people is a tremendous responsibility. We owe it to you and to our future users to continue to perfect Evernote for both individuals and teams.

But we will never lose sight of our founding principles: a note in Evernote is a canvas for everything. It is rich, it is versatile, it is alive, and it is yours. A note is the beginning of an idea, and ideas are for the ages. That is the commitment of #forevernote.