World–famous foundation for the preservation of, and communication with, gorillas and apes expands its usage of the FileMaker Platform throughout the organization — and beyond.

One platform, many uses

The Gorilla Foundation is no stranger to the FileMaker Platform. Several years ago, in an effort to catalog the organization’s gifts and donors, executive director Dr. Gary Stanley oversaw the development of a custom app using the FileMaker Platform. It worked so well that Stanley developed more custom apps to power office operations, from online store backups to volunteer tracking to human resources management.
Noting the success of those apps, Stanley realized he could use the FileMaker Platform to do something even more innovative: create custom apps scientists and research teams could use when interacting with the organization’s biggest star — Koko, the signing gorilla (Koko is known globally for her ability to communicate using American Sign Language (ASL), and offers a fascinating glimpse into the world of her species).

One of the most powerful benefits of using the FileMaker Platform is that it's so streamlined and both user- and developer-friendly. It helps us to develop and maintain large, powerful apps quickly, with a small staff.
— Gary Stanley, Ph.D. Executive Director The Gorilla Foundation 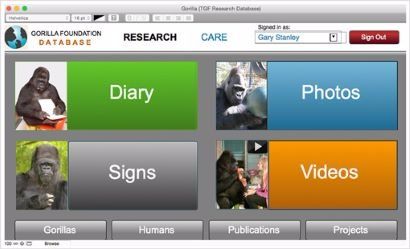 The Gorilla Diary app allows caregiver-researchers to enter coded notes about their sign conversations and experiences with gorillas Koko and Ndume, using a customized "virtual keypad" that facilitates data entry and leads to automatic tabulation and analysis of signs.
Stanley used the FileMaker Platform to develop Gorilla Diary, a custom app for caregiver-researchers to catalog Koko’s (and her male companion, Ndume’s) communications and behaviors. This app solves the problem of scattered information and data re-keying.

Caregivers use [the app] all day long," Stanley reported. "We created a custom keypad to catalog all of Koko’s signs, vocalizations, and behaviors — as well as those of Koko’s male companion, Ndume.
Using the app on iPad and iPhone devices, caregivers interact with Koko. They’re able to quickly tap the keypad to record each communication, and tap corresponding codes to indicate how a sign was modulated; whether it was spontaneous or in response to a question. Previously, data was captured using paper notes and written notes on laptops.

"Using our app, we can quickly see how many times each sign or phrase was used, and in what context," said Stanley.
The app also allows the scientist/caregivers to discover which signs
Koko uses most frequently, most recently, and lets them add new ones into the menu.
"We’ve been recording codes for signs and phrases with handwritten notes for decades," Stanley added. "Now we use a touchscreen code palette built into the app where we can conveniently enter the appropriate codes next to the corresponding sign or phrase as Koko expresses them. The app does all the tabulation and analysis, and enables us to produce sophisticated searches and reports."
Gorilla Diary allows the researchers to explore questions about how Koko uses language, and how her use of language has evolved over time. Research teams also use the app to discover how Koko’s language changes with respect to her environment and level of contentment with her caregivers.
"If our custom app did nothing more than record her coded signs, vocalizations and behaviors, that alone would be worth it," Stanley said.
. 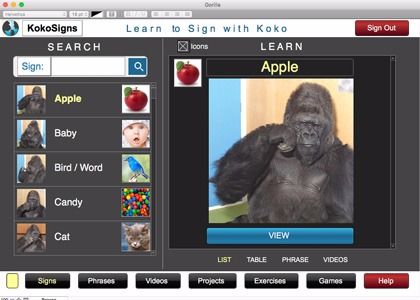 The Gorilla Foundation’s apps exceeded the organization’s original vision for what the FileMaker Platform could achieve. "In particular, we created our custom apps to make a comprehensive repository for all of our multimedia research and care data," said Stanley. "These apps have convenient links that integrate every aspect of our work. Now, all our caregivers and researchers can use iPad, iPhone, and laptops to share data at the same time — and not just with each other, but with consultants, colleagues, and partners across the globe."
"One of the most powerful benefits of using the FileMaker Platform is that it’s so streamlined and both user- and developer-friendly,"Stanley noted. "It helps us to develop and maintain large, powerful apps quickly, with a small staff. I can do most of the development myself, without having to hire outside consultants — and yet the same transparent developer interface makes it easy to engage consultants as needed (which has been rare)."
Like many non-profit organizations, the Gorilla Foundation needed to concentrate its resources on its core mission: gorilla study, care, communication, and global conservation of the species rather than on large IT implementations.
"FileMaker, Inc., helps us achieve that goal," said Stevens.
To learn more about the FileMaker Platform, download your free trial. To learn how to build your first custom app, visit the Custom App Academy to watch a series of free educational video tutorials.
.
.
.
Products
Products Overview
How it Works
What's New
Starter Solutions
Demos
Custom Apps
Showcase
By Industry
Mobile Custom Apps
Customer Stories
Resources
Support
Knowledge Base
Downloads
FileMaker Community
FileMaker Technologies
Contact Support
Learn
Custom App Academy
Webinars
Certification
Developer Careers
Developer Conference
Partners
DIY or Hire?
Find a Partner
Idea to iPad
Made for FileMaker
Become a Partner
Legal
Privacy Policy
Piracy
Company
Sitemap
Contact us
Language EN
English
日本語
Deutsch
Français
Español
Italiano
Nederlands
Svenska
中文
Português
한국어
Русский
Türkçe
Čeština
Polski
Change Country Preference
Copyright © 1994-2017, FileMaker, Inc, FileMaker International. Terms of Use. Prices are exclusive of VAT/sales tax and are subject to change without notice. The VAT/sales tax rate for Electronic Software Downloads and other FileMaker products classified as services under local law will be at the rate applicable to the country where the customer belongs.