The Jones Companies, a national market leader in recycling based in Columbia, Mississippi, contracts with convenience stores, retail stores, and grocery store chains to pick up and recycle thousands of pounds of unwanted cardboard every week. The problem? Jones’ paper-based workflows — route scheduling, customer lists, and bookkeeping, were slow and inefficient, creating a roadblock to growth. To fix this, The Jones Companies teamed up with Tampa, Florida-based MacTutor, a FileMaker development and training company to create an iPad-based mobile custom app that utterly revolutionized their business. In 2016, that custom app went on to win the FileMaker iPad Pro contest, demonstrating the best use of the contest criteria: aesthetics, app usefulness, ease of use, mobility, and green initiatives. 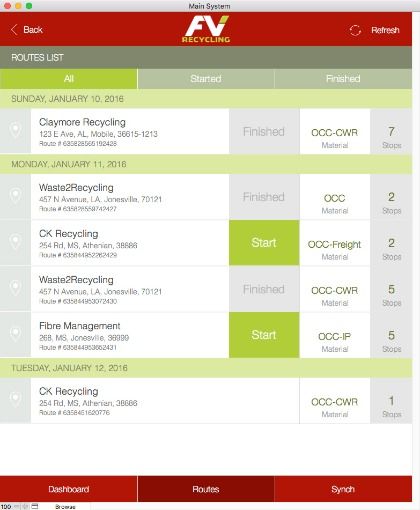 Easy Visibility. Drivers can graphically select and navigate to the route they will be running and see the name, materials to be picked up and number of stops.

Before the Jones Companies implemented the app, they were mired in paper processes. They had piles of spiral-bound notebooks that contained the essence of their business, and, as the business grew, the paper method became untenable. “We knew there was a better way," said Chris Bullock, Technology Director, The Jones Companies. “"We’d already done quite a bit with custom software development. We were interested in an app that was going to cost less. We had also already given our truck drivers an iPad for email while on their routes, but for the kind of app I had in mind, we were going to need help." Bullock found MacTutor from the list of FileMaker Business Alliance Platinum developers and made the call.

Robert MacKay, the president of MacTutor, met Bullock in Mississippi and conducted a thorough discovery process. After an iterative cycle of development and testing, MacTutor developers delivered an app that followed procedures already in place for The Jones Companies back office, replacing paper forms and providing integration with the company’s existing QuickBooks. Meanwhile, as drivers on their routes enter information into the iPad app, dashboards at the office track each truck through integration with Google Maps, and the app feeds real-time information about the amount of cargo in each truck. Then, drivers present each customer with emailed receipts.

“We made sure that we duplicated their day," said MacKay. “You shouldn’t have to change the way you run your business to meet the needs of the software." McKay’s team made sure the app is visually appealing and easy for non-technical truck drivers to use. The custom app incorporates the company’s corporate colors and branding, and efficiently designed screens that look equally beautiful on both iPad and iPad Pro.

The integration between the office and the field for scheduling, and being able to have statistical data in real time has given us visibility into our processes, and that enabled us to grow. Weʼre making our business greener, and enabling our customers to dispose of their recyclables in an even greener way. 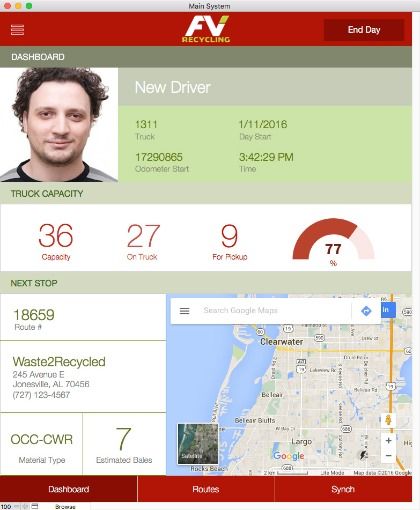 Route Details. drivers can instantly see the current status of any route, the number of bales on truck, capacity remaining and those on the next stop. This gives the drivers a quick idea of what to expect at the next stop & quickly adjust their routes to maximize the load size and efficiency.

After a year of using the app MacTutor created, The Jones Companies acquired a competing company and added numerous routes without significantly increasing the workload for scheduling and bookkeeping. “Having this app was very important to our being able to make this acquisition. Having the right system in place was critical." Bullock added. “The integration between the office and the field for scheduling, and being able to have statistical data in real time has given us visibility into our processes, and that enabled us to grow. We’re making our business greener, and enabling our customers to dispose of their recyclables in an even greener way."

Copyright © 1994-2018, FileMaker, Inc, FileMaker International. Terms of Use. Prices are exclusive of VAT/sales tax and are subject to change without notice. The VAT/sales tax rate for Electronic Software Downloads and other FileMaker products classified as services under local law will be at the rate applicable to the country where the customer belongs.

Please help us improve our website by telling us what task you were trying to complete during your visit: Were you able to achieve this?
Yes No

Thank you for providing feedback!