Grant Snider on Art, Life, and Knowing the Difference

Cartoonist Grant Snider on Art, Life, and Knowing the Difference

No matter what your day job is, you can always make time for creativity 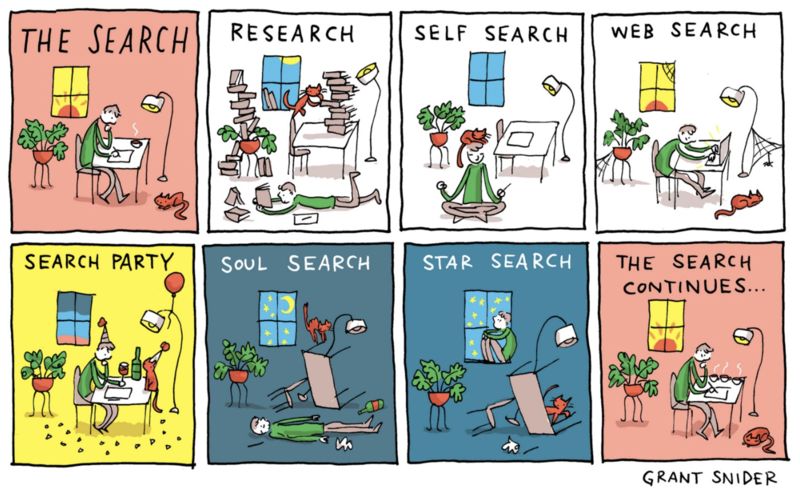 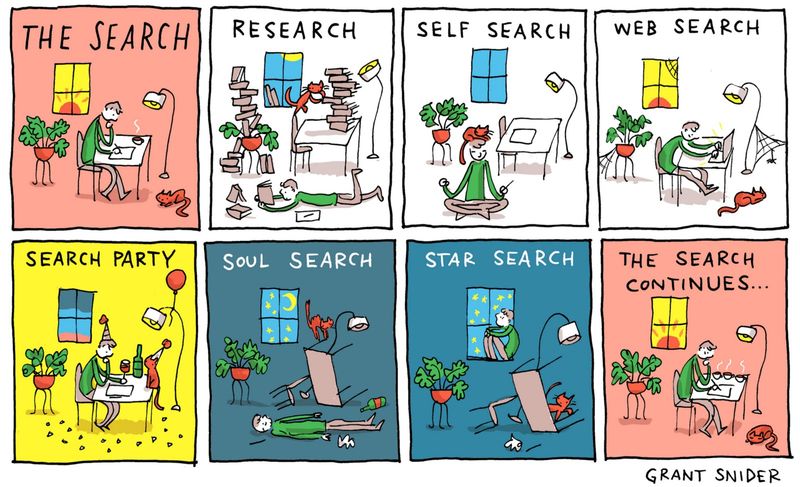 Great artists often appear to occupy a space of their own, removed from everyday reality. For cartoonist Grant Snider, that kind of surreal existence is all in a day’s work.
Grant’s charming, minimalist panels frequently appear in The New York Times, The New Yorker, and other top publications. He’s also created a few comics for us here at Evernote. But that’s just one side of a unique double-life. When he’s not drawing, Grant is doing something surprisingly mundane: fixing people’s teeth.
“I think to do this you have to be slightly disassociated with reality," he says, referring to the cartooning, not his orthodontic practice. “It’s kind of ridiculous to sit in a room with paper and pen and a laptop and try to create something out of nothing. For me, it’s a way to laugh at my creative struggles." 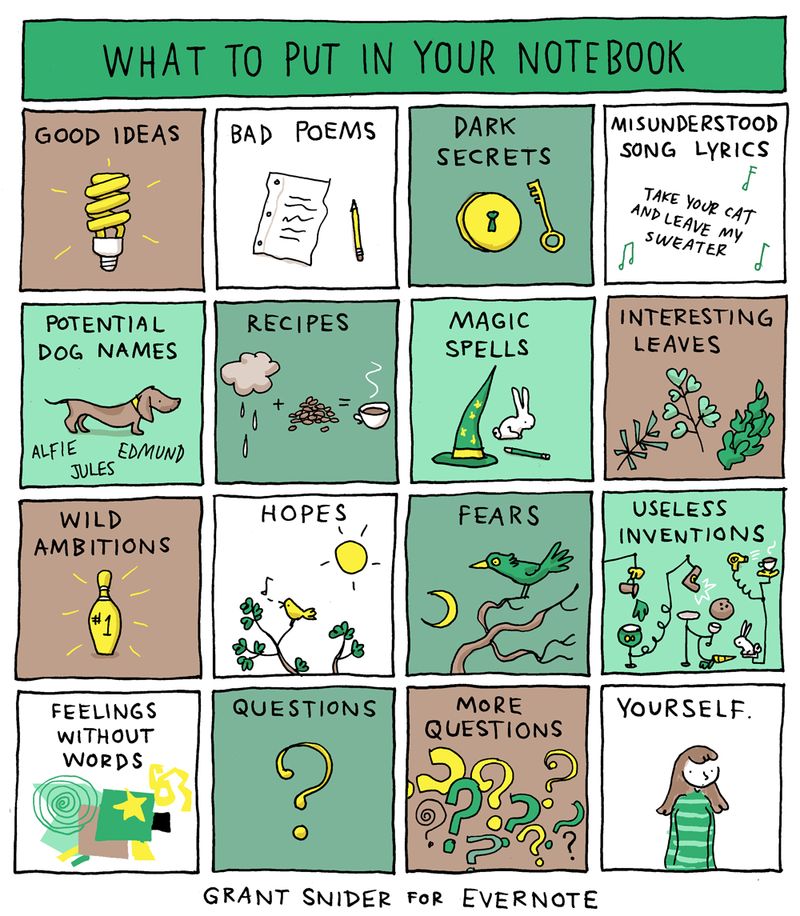 The struggle between Art and Life

The struggles of art and life are frequent topics for Grant’s cartoons, which he began creating in college. “Cartooning fell into place for me as I was about to start dental school," he says. “My struggle was I wanted art to be a part of my life, but I didn’t know how. I didn’t know how I was going to find the time and the motivation."
In college, Grant used cartooning as a way to blow off steam after a particularly tough class. “After sitting in a lecture about tooth anatomy, I could just sit down and doodle and not think about those challenges," he said. “When I was struggling with a piece of writing or drawing, I could escape to something more reliable."

Today, Grant’s schedule is grueling. He still talks and draws his way through his days as a way to stay in touch with his inner life, while meeting the needs of his patients and his growing family. “I was drawing self-help comics and didn’t realize it," Grant says. And through that, he found his voice — and his audience.
Finding it wasn’t easy. For a long time, Grant says, he felt like he was on an “island of creativity." Though he has a twin brother and a wife, he realized that there were not a lot of people who understood what he was trying to say. “I was with somewhat uncreative communities and groups of people when I was in dental school," he remembers.
And while there are a lot of creative people in the world, he knew, they were each on their own “islands." That understanding led him to discover his hidden audience: other writers, creatives, and designers. “My audience isn’t always pros in their field, but they have aspirations in that direction. It’s an audience I never saw, but I was part of." 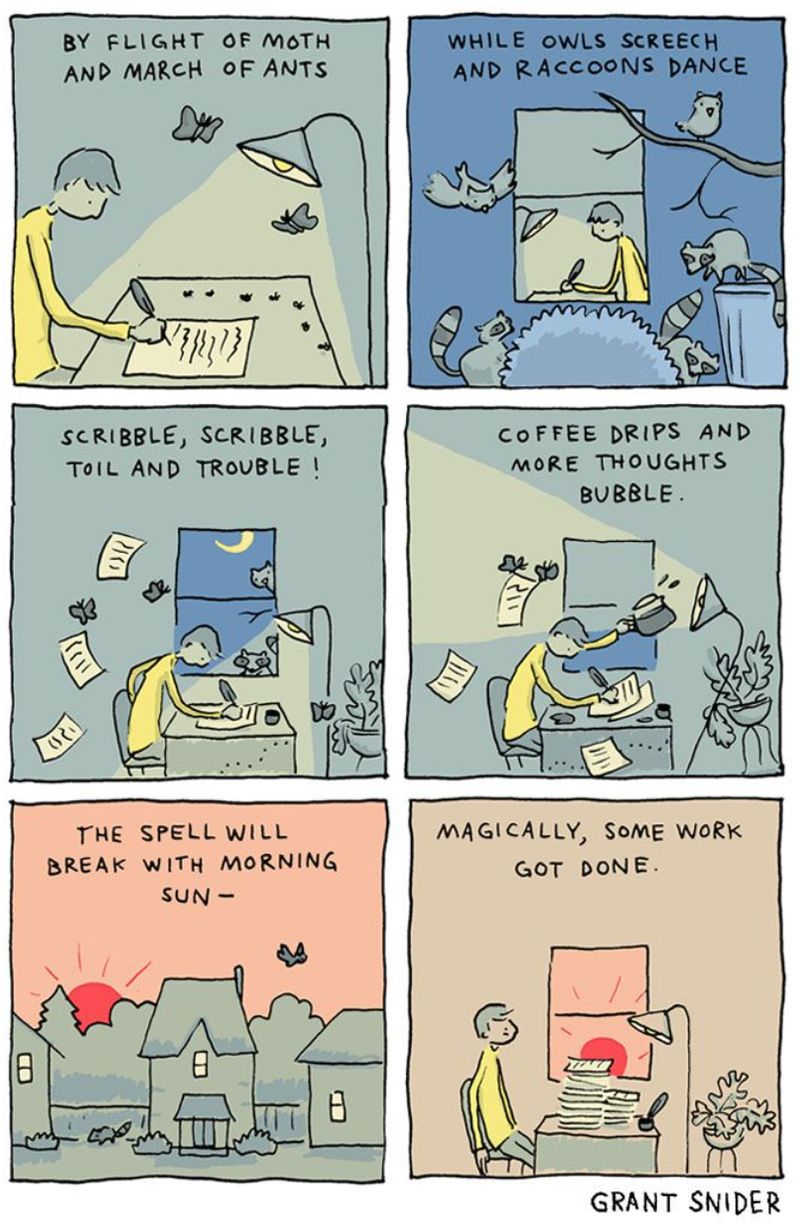 This comic/magic spell appears in the Summer 2015 issue of The Southampton Review. Thanks to editor Lou Ann Walker, and apologies to William Shakespeare.
Grant often illustrates points by referring back to his comics. He knows the internal struggle because he’s drawn it before. “There’s a comic I did called An Incantation, which is a takeoff of Shakespeare," he says. “The character is reciting how to be productive and how to get work done." It’s a tactic that mirrors his own life.
“I force myself to get up at an hour I have no interest in seeing, and spend time alone at the drawing table. I work in one to three-hour sprints instead of trying to get it done in a single shot. Breaking it up over a week is almost like a relay race. I do one leg on Monday, another stretch on Tuesday, and something else on Wednesday. By splitting up the work like that, I can turn a daunting task into something manageable."

“I force myself to get up at an hour I have no interest in seeing, and spend time alone at the drawing table."

A plain page or canvas — so many possibilities

In another comic, The Internal Decathlon, Grant explores another struggle familiar to the creative mind: both fearing and loving the possibilities of the blank page. 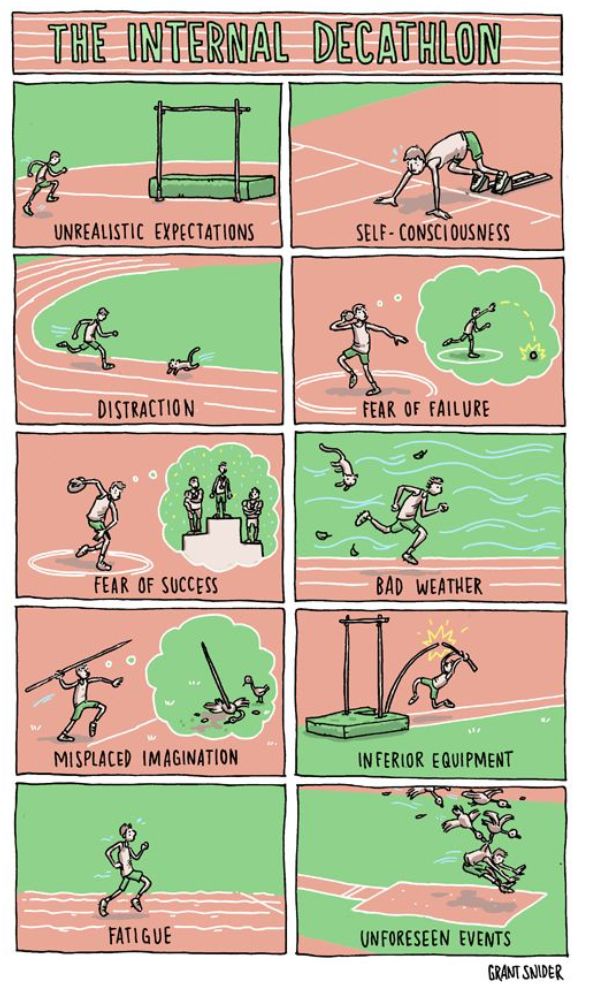 “A common thought when you sit down to something new is that you can’t beat what you did before, and that inhibits creativity and the ability to do new work," Grant explains. “You have to invent a new strategy each time. Lately, I’ve realized that maybe it won’t be better in the same way as it was before, but I can do something different and new. That’s what creativity is all about. You have to start fresh each time and not be influenced by things that have worked well for you in the past."

Grant’s tips for managing the struggle

“For me, it’s one thing per week," Grant says. “I don’t care how busy I am, how stressful work is, I’m going to put one new thing out to the world per week. There are weeks I don’t feel like doing it, and times I feel like last week’s comic was enough, but I made a promise to myself. When I don’t meet that requirement, I feel like I’m not doing the work I was put here to do, betraying myself, in a way. I get a nagging sense of disappointment in myself. Sometimes I’m really proud of it, but if I’m disappointed, it gives me the motivation to be better the next time."

Grant swears by going to bed early, and he puts his phone in a different room to make sure it doesn’t tempt him. “If everyone got enough sleep, our world would be a much happier place," he quips.

3) Remember to get input.

Grant sometimes worries that he spends so much time trying to produce work that he forgets to get input, or what’s inspiring him to do the work. He explores that worry in a section of the book called Imitation. “When I’m having trouble being productive, the reason is often because I haven’t gone out and looked for new sources of inspiration," he says. “It’s important to take an afternoon and go to the art museum and just sit and sketch, or walk around the neighborhood with a pencil and paper and put myself in a different mindset. The key to productivity is taking a step away from it. And that’s so hard to do. I’m so focused on getting one thing out a week, that I’m not giving myself playtime."

“I don’t care how busy I am, how stressful work is, I’m going to put one new thing out to the world per week.

Why your creativity is worth pursuing

Grant encourages others to follow in his footsteps. With one foot in each realm, Grant gained wisdom and insight few have about how to make time for both art and life. “Everyone has something creative that they want to do that they’re not living up to, or maybe they’ve taken a wrong turn," Grant muses. “In a non-creative job, anyone can still find the time to be creative and make things on their own schedule."
“We’re at an amazing time for creative people right now," he continues. “There’s nothing stopping you from getting your work into the world. The only thing stopping you from making the art you want to make is your own self-doubt. There’s an audience that’s waiting for it. I think the overall message to take from my book is your ideas matter, and they’re worth pursuing, no matter how unrealistic it seems."
Look for some of Grant Snider’s other comics at his website, Incidental Comics.