When it comes to DIY (do it yourself), nobody does it better than Big Table Media. The Sacramento, California-based television production company creates 12 series for cable channels HGTV, The DIY Network, and more recently, the Disney Channel and the Travel Channel. Their shows include the immensely popular House Crashers, Yard Crashers, Kitchen Crashers, and Disney Holidays. Altogether, they create 156 individual episodes for these 12 shows every year, and they manage the entire post-production process using a custom app, TableTop, that they created themselves using the FileMaker Platform.

“We use TableTop for every aspect of post production," reported Andy Brooks, director of information and digital video technology for Big Table Media. “From the minute the footage comes in the door to the moment we ship out a completed episode to the network, the FileMaker-based app manages it."

Project management of television production is intricate and complicated. When raw footage comes into the Sacramento studio, it’s checked into the FileMaker system, and routed first to the writers. Reality-based television is scripted after the footage is shot, so writers get the first look at the footage and decide how to order the show. When the writers finish a script, they use the app to notify the production team that an episode is ready for editing. The process continues through video mastering and taping, where voice, music, and graphics are added. After that process, Big Table Media is ready to ship an episode to the network. 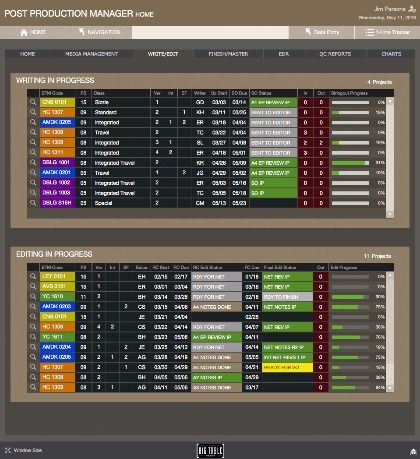 The Post Production Manager FileMaker app tracking screen allows for real-time tracking of progress as the show moves through production, including estimated percent complete prior to delivery to the network.

“Before we developed TableTop, post production consisted of a lot of emails, text messages, and meetings," Brooks said. “Now we just log into TableTop and only make a phone call if there’s an emergency. If something goes wrong, TableTop has automated triggers to alert us," Brooks explained. “For example, if we don’t have the voice-over talent, we used to have to call the producer, who would have to call the artist, and the artist would record and send the voice file. Now a missing voice-over will trigger an email to the artist, the post-production team, and the producer, and so we know where the ball is. Emails get lost, phone calls get forgotten, but now we have a trail, and we can see exactly where the holdup is."

Over the course of 12 series, the FileMaker app is saving Big Table Media $12 million a year. That’s a fantastic return on investment. 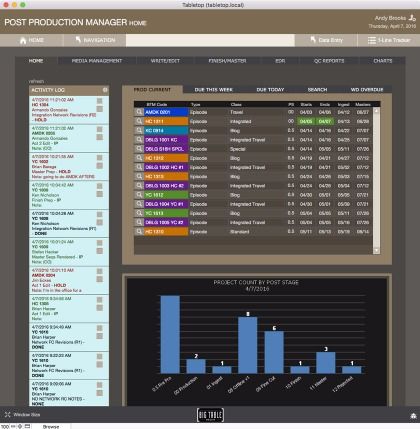 Real-time “ticker-tape" allows management to see processes in progress and as completed throughout the production process within the FileMaker app.

Implementing the app and changing the manual processes of the 16-year-old company was a lesson in deconstruction and discovery. “We needed to see what everybody did," Brooks said. “We delved into individual steps and related those actions to every other employees’ job. Each step would eventually become a screen within the app. We laid it all out for the principals of the company, and they were shocked. They said, ‘we do all this?’" It was the first time we had insight into the way our company worked."

Ensuring that employees would use the app was an important step to success. “Editors want to edit shows," Brooks said. “They don’t want to check boxes and spend a lot of time interacting with an app. So we made the editor console very simple. But ingest professionals (people who take in raw materials and prepare it for production) make lots of phone calls and emails, so they appreciate having several screens to guide them through."

Brooks admits that the tight-knit group of creative professionals was a bit skeptical of changing to an automated system at first. However, Brooks said that the proof of concept happened during the beta period when TableTop caught a critical error that would have cost the company a lot of money. “Someone had left out an executive producer credit," Brooks explained. “The network will reject an entire episode if there’s something missing. An editor should have caught it. A mastering guy should have discovered it. But nobody did. The FileMaker-based app found it and sent a trigger to the team. That was a real ‘aha’ moment for everyone."

Now that the post-production part of the app is complete, Brooks is creating additional functionality for location scouting and filming. Home improvement and DIY television depend on having homes and rooms to remodel, and Big Table Media’s location scouts travel all over the country looking for houses and owners that make great television.

Armed with iPad Pro devices, location scouts and producers take photos and videos of prospective homes, yards, kitchens, and baths in need of renovation, and send them, along with story notes, directly to the producers using the TableTop app. “The show producers can say, ‘I like that, book that guy right now.’ We don’t even need the address. We know where the house is because the scout is using the GPS built into iPad Pro," Brooks enthused. The scouts then use the signature capture feature built into FileMaker Go and release forms within the app to sign prospects on the spot and send the contracts back to headquarters instantaneously.

When the film crew arrives, Brooks says they’ll use TableTop to manage call sheets, which have traditionally been paper-based. In television and movie production, on-set staff prepares a daily list of all the information needed for the day’s shoot — who is expected on the set, where the shoot will take place, the time that each person is supposed to be there, and what will be filmed. The staff delivers call sheets to everyone at the beginning of the day or the previous evening. With TableTop, all the call sheet information can be dynamically generated and distributed with a touch of a button. Any changes can be signed off, and the production people can distribute the updates with no lag. “And the best part is," Brooks pointed out, “no matter where they’re shooting, the managing partners back in Sacramento can keep tabs on production in real time."

An ROI worth millions

Brooks estimates that the implementation of TableTop saves the company 30 percent off total production costs. Each episode costs $250,000 to produce. A series is 13 episodes. “That’s a million dollars per series," Brooks said. “Over the course of 12 series, the FileMaker app is saving Big Table Media $12 million a year. That’s a fantastic return on investment."

Big Table Media knows the value of DIY. Building their own custom app using the FileMaker Platform has certainly paid off for this production company as they make over homes for television audiences all over the world.

Copyright © 1994-2017, FileMaker, Inc, FileMaker International. Terms of Use. Prices are exclusive of VAT/sales tax and are subject to change without notice. The VAT/sales tax rate for Electronic Software Downloads and other FileMaker products classified as services under local law will be at the rate applicable to the country where the customer belongs.

Please help us improve our website by telling us what task you were trying to complete during your visit: Were you able to achieve this?
Yes No

Thank you for providing feedback!