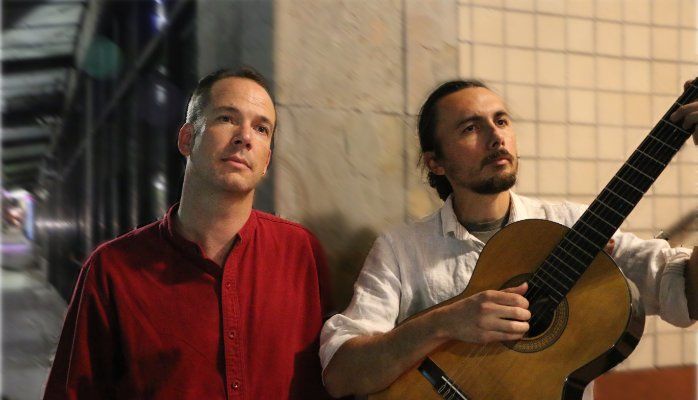 Listen to my song — and understand me, too

I'm a singer. I love how songs can speak across boundaries of culture and time, bringing people together in a moment of powerful shared emotion. Every aspect of a song is important — including the melody, harmony, and rhythm — but more than anything, I care about the lyrics — that is, what a song has to say. That's why I sing: to tell a story.

There’s just one small problem. I sing in Spanish, for a primarily English-speaking audience. I'm captivated by the beauty and variety of popular songs from South America, such as pasillos from Ecuador, bambucos from Colombia, and merengues from Venezuela.

While I work hard to convey the distinctive sound of this repertoire — which combines African, Indigenous, and European elements — I also want people to understand the poetry it sets to music. Each story should hit them right in the heart. The question has always been: how?

For years, I printed translations of my songs and distributed them before each show. However, performance venues typically turn off the lights when a show starts, so audience members had to study the words before we began — and even then, they had trouble remembering what they read. I knew there was a better way.

Fortunately, I’m also a FileMaker developer. I create custom apps that solve unique business problems. One day I realized that the answer was right at my fingertips: I just needed to make the connection between my two worlds.

From the opera to intimate nightclubs

I started thinking about supertitles at the opera. Operas are often performed in languages that many audience members don't understand. As a result, the audience can only guess about what's happening onstage, taking cues from each singer's voice and body language — which is what my some of my audience must do as well.

However, when opera companies project supertitles, ongoing translations appear above the stage, allowing people to follow the story. I realized that a similar solution could help my audience, too.

Taking my inspiration from the opera, I created a custom supertitle app using FileMaker Pro. By adding an inexpensive LCD projector, I could project the supertitles from a laptop. The app I created stores both the Spanish lyrics and English translations of each song in my repertoire.

Here’s how it works: when my assistant starts the app on the laptop, two independent windows are displayed. He views one window on the laptop, while the other is projected onto a screen onstage. The laptop window displays the Spanish lyrics, divided into short lines that follow my musical phrasing. Throughout the performance, my assistant uses the keyboard or track pad to select each Spanish line as I sing it. This causes the onstage window to display the corresponding English translation, following my performance line by line.

Initially, I thought that I'd have to deliver the lyrics perfectly to stay in sync with the app, but happily, this wasn't the case. The first time we used the app in performance, I accidentally skipped a verse of one of the songs. It didn’t matter. Because my assistant could see the lyrics for the entire song, he quickly located the phrase I was singing and was able to skip ahead, seamlessly.

A relatively simple app like this can make all the difference by targeting a specific need and meeting it well. I wanted my audience to understand me. Now I can feel them right there with me, taking in every word. There's a definite shift in the energy: the songs are finally speaking to everyone the way that they speak to me.

I've received enthusiastic feedback from my Spanish-speaking audience members as well. More than anything, they appreciate my commitment to communicate the meaning of these songs to an audience that might otherwise never hear them. This music hasn't had much exposure in the United States, and it's losing popularity even where it was born. I'm committed to do whatever I can to help keep it alive.

Do you speak Spanish?

If you don’t, would you try an experiment for me? Watch this video of me performing the Argentinean bolero "La Torre" with my music partner, the Colombian-American guitarist Felipe Gómez. This is a close-up shot where you can't read the supertitles.

Next, try watching this version of the same video, shot from further away where the supertitles are fully visible. Did understanding the lyrics change your experience of the song?

And if you do speak Spanish, I'd appreciate it if you'd watch the second video anyway — I'm curious what you think of the translation!

From one app comes many ideas

From a technical perspective, my app was simple to conceive and create, and the idea of supertitles isn't anything new. However, my favorite thing about the FileMaker Platform is that it doesn't require a huge programming effort. In this case, it took me less than two hours to build the app once I had the initial idea. This ease of development sets the creative side of me free to imagine what else my app might do.

For example, I can envision the possibilities beyond translating a concert. The same app easily could be extended to store translations into many languages for a range of public situations. If the app were hosted on FileMaker Server, people could connect to it with their iPad or iPhone while at a training, lecture, or play, viewing translations in the language of their choice.

I believe in bringing people together. This music — and the app I built to help communicate it — builds bridges, breaks language barriers, and enables shared emotional experiences among people from different cultures.

As passionate as I am about popular songs from South America, I'm also passionate about technology that removes obstacles and liberates people's creativity. Using the FileMaker Platform, all of us can experiment, prototype, and create custom apps that meet our specific needs, regardless of the industry we work in. Who knows? In the process, we may come up with some truly groundbreaking ideas.

I love what I do when I’m not at work, and I created an app using the FileMaker Platform to help share it. You can, too. Here’s how to get started.

What a straight forward way to use technology to expand your potential audience. I felt much more included in the second video of your performance. Very cool.

Thank you, I'm glad to hear that it worked for you. Very affirming!

My initial reaction to watching both versions of the YouTube video is: Wow! Having heard some of this music previously, my preconceptions were: 1. The music is great and very evocative in any case, but 2. I expect reading the lyrics in real-time will make a positive difference in my experience These were both born out, but I was truly surprised at the kind of difference it made—not just a quantitative increase in my appreciation of the music, but a qualitative transformation of my experience of it. And it raised an interesting wrinkle I’ve found in my feelings about opera: there is something *extra* in the experience of hearing the music in a language I don’t understand while also being able (via the supertitles) to understand the story being told. The music retains a certain mysterious and purely emotional character that is at the same time enhanced by knowing its story.

Thank you, Alexei! As usual, you bring the perfect combination of head & heart to your analysis. I totally agree about songs in other languages being more mysterious & evocative -- that's one of the reasons I started singing in Spanish in the first place (that, and I fell in love with a Colombian guy). I really appreciate your taking the time to share your thoughts here.